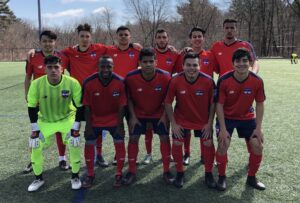 The fireworks were saved for the second half as the young Lions led 2-1 before the Brazilian forward completed his hat trick from the penalty spot.  Batista then added a fourth strike to reestablish a two-goal advantage after the Legends had scored in reply.

The win followed on from victory in the first competitive match of the season in the McKenzie Cup last weekend when Mystic River were beaten 2-1, with Batista and Matheus Araujo on target.

Boston City FC II, whose matches are presented by The Giasce Group, are next in action when they travel to BRFC Druids at 9am on Saturday, April 13, in the familiar surroundings of Harry Della Russo Stadium in Revere.

Boston City FC II could welcome back trio Samuel Deossa, Chris Gilbert and Jeremy Pachter, who are due to return this week from a spell training at the club’s academy in Brazil.