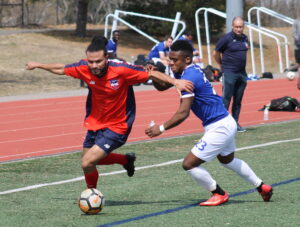 One of the most potent goal scorers in Boston City FC history and a teammate with the potential to supply him with scoring chances are back with the Lions for the new National Premier Soccer League season.

Striker Jhonata Batista (above), who spent the 2018 NPSL campaign with cross-state rival Greater Lowell after playing for two seasons in Boston, has returned. Joining him in a right-sided attacking role is Rigoberto Jimenez (right), who was with the club last season.

Batista has already been among the goals in 2019, terrorizing defenses in the Bay State Soccer League for the Boston City FC II development team.

The goal-hungry Brazilian was averaging a goal per game in 2017 when he suffered a season-ending injury. In 2016, he had struggled to hit the target having arrived from playing in the NPSL in California, scoring twice in 13 matches before injury kept him sidelined.

The hard-working forward rejoined the Lions in the fall after his spell in Lowell, scoring freely for the BCFC II team as they just missed out on promotion in the BSSL and netting in U.S. Open Cup qualifying.

This year, Batista scored the winner in a 2-1 McKenzie Cup victory over Mystic River to open the BSSL season and then fired four goals in a 5-3 win away to Lynnfield Legends in league action.

He returns to the NPSL side, looking to add to nine career first team goals, a total that is third overall behind Isaac Addai (17) and Homero Morais (10). The 23-year-old has recorded five assists in his time with Boston City, a figure bettered only by Addai’s eight.

Jimenez played in every match of the 2018 season and was on target as Boston City beat upcoming opponent Hartford City in a 2-0 win last term. The Honduran has also played an integral part in Boston City FC II opening their 2019 BSSL campaign with three straight wins.